Quite a lot is new this week. Novarus is in, with new factions, submarines, gun turrets, torpedoes, and stations. There's a new docking tower model, bringing them up to the standard of the rest of the Hudson station modules, lots of bug fixes and tweaks, and major gains in performance. To repeat from last week, the full new tally of content is: 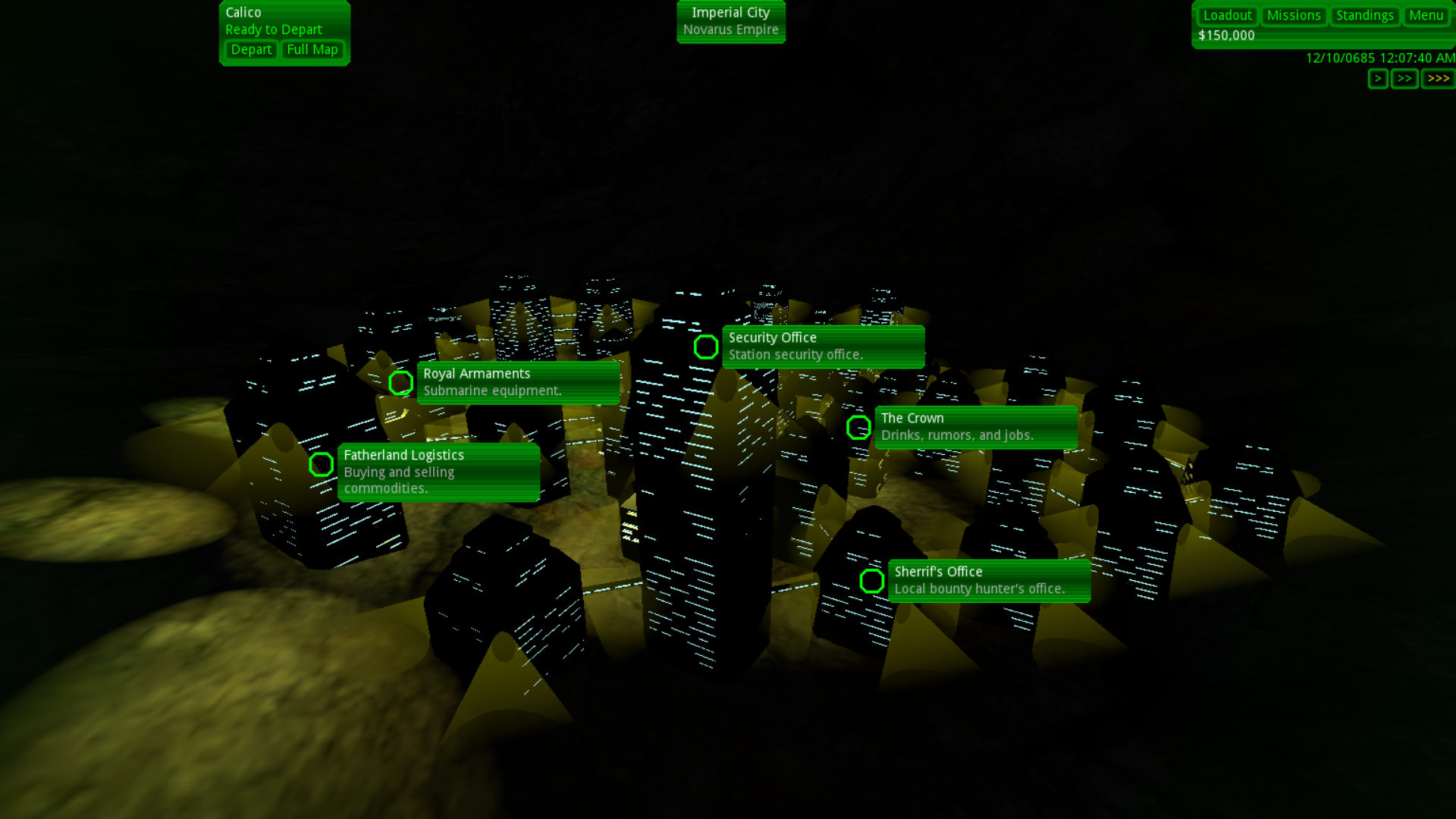 For the next week or two I'm going to take time to catch up on small issues that have escaped my attention until now. Quality of life things,  some bugs, and general small improvements are all on the table. Hopefully I'll be able to really nail things down before I start work on yet another big feature. Speaking of which:

There are quite a few big features that I have planned, each of which is probably several weeks of work just in isolation. The below list is in no particular priority order, though I'd love to hear feedback on what strikes the most interest.

Add NPC mercenaries to the world that can be hired from stations to act as escorts. For now this will be limited to small-medium battlesubs, who will follow your submarine around and attack anyone who attacks you. Henchsubs will handle their own repairs and resupply, but can be given some orders.

One of the major benefits behind the new procedural station system is that it forms the groundwork for a dynamic world. This would expand upon that, adding systems for dynamic world events ranging from production changes, to medical emergencies, to border skirmishes and wars.

Right now the procedural stations don't have any NPCs. This renders the world somewhat empty, and makes some narrative or gameplay avenues impossible. To add NPCs to the new procedural stations there will need to be significant work done allowing for NPC locations to change, and even procedural generation of the NPCs themselves.

I have some plans for mining gameplay, involving several stages. AI subs would also engage in mining, sometimes coming into conflict with your own mining operations, and offering an opportunity for the less scrupulous to swoop in and steal valuable minerals. In brief, these steps would be:

Scandav is a nation to the south-east of Novarus. They feature a specialty in sonar and sonic weapons, and are notable for having more torpedo launchers than is typical. They will be a faction on par with Hudson, with 4 or so stations, and a full fleet of domestic sub designs. They are the third and last major country in the central playing area.

Gennis is a tiny nation sandwiched between Scandav and Novarus, dating back to the Redeemist crusade of the early 600s. They hold only two stations, and are prohibited by treaty from warship production. As such they are in an interesting position, and have fully embraced minisub technology to give them an edge. Their immediate neighbors are antagonistic towards them, but they have a friendly relationship with Hudson, and offer clandestine support to rebel groups in Novarus.

The principalities are the fourth major country, and are situated far away from the other three. They operate in a legal grey zone, so far from outside eyes they can deal with pirates and outlaws to an extent not possible for Scandav, Hudson, or Novarus. That said they do engage in substantial trade with the core nations.