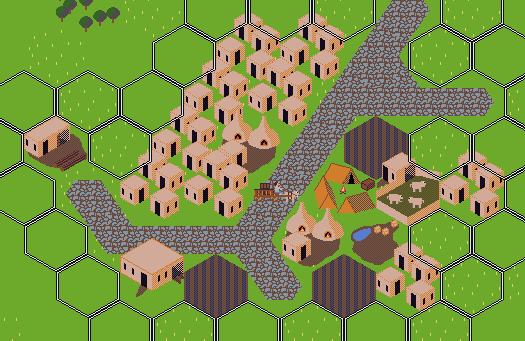 Roads and trading are wrapped up. From a code standpoint the implementation feels better in 2.0 than the 1.4 version, a lot cleaner and more maintainable. I'm going to take a few days to work on mod support and then it's on to Masklings. My plan is to have the enemy behavior be entirely modable, hence some improvements in that area are needed before I get started on the Masklings.

Some of the work for trading ended up laying the groundwork for warbands, specifically around tradehouses and trade caravans. Warbands and trade wagons will be handled significantly differently in 2.0 than they were in 1.4. The new approach will address a the easily exploitable behavior in the old system.

Warbands in 1.4 were treated as an independent group, not tied to any settlement. The warriors in a warband only consumed food when garrisoned in a settlement, and they only had to do that to heal. The rest of the time they would happily stand out in a field, eating nothing. Coupled with the way immigrants worked, it was really easy to create huge armies. Citizens that joined a warband would leave the settlement, which would raise the settlement's "wealth per capita", and attract more migrants, which could then be moved to a warband to start the cycle anew.

In 2.0 warbands (and trade caravans) are tied to a settlement. Instead of being a separate group, each warband will be tied to a specific barracks. Each barracks in a settlement will train and support a single warband. These barracks will require a worker (like most buildings), and will periodically consume items. This will represent the drain on manpower and resources to train and maintain a fighting force. If the settlement doesn't have enough items or workers, then the warband will slowly lose health.

This will directly link your economy to your military. The rate of item production limits the number of barracks you can support, as does your population.

Different types of barracks will produce different warbands, and will require different items.

This sounds like a really great improvement, can't wait for it

That all sounds great man, keep it up!