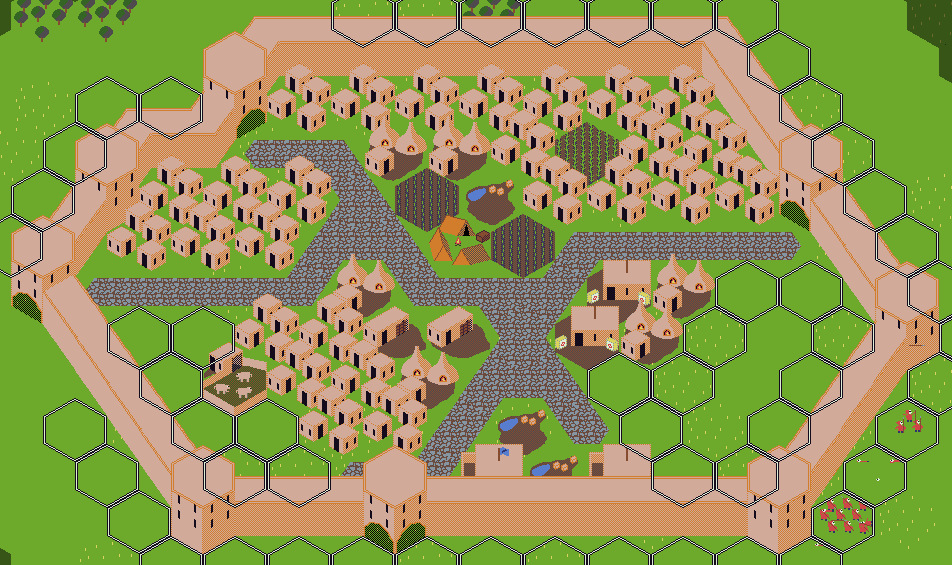 I got a little distracted by further work on Maskling AI this week. There are some edge cases where it can get in a state that kills performance. There's more work to guard against that to do, but it's back to a stable state. On a related note, warband on warband combat is in, along with towers, walls, gatehouses, and towers/gatehouses shooting at warbands. Sound effects are also finished, music should be finished as well by tonight or tomorrow. I'm running a few days behind my tentative schedule.

Your citizens will no longer have to rush to gatehouses and towers when under attack, instead they interact with the pop system the same as any other structure. They require a worker to operate, and when operating they can shoot at nearby enemies. So, in a sense they function like 1.4, if you had them set to "Keep Manned". This should keep things simpler, so you can worry about other things, like ordering armies around.

Gatehouses are also simpler than in 1.4. Instead of having open/closed states, they are always passable to allies, and impassible to enemies.

In 1.4 warbands would attack any enemies they saw, and they tended to get "stuck" in combat, regardless of what you wanted them to do. New for 2.0 are combat stances, these determine how a unit will react to enemies. Combat stances can be changed at any time while a unit is selected.

I'm hoping that combat in 2.0 will have more of a tactical feel to it than in 1.4, and reward strategy instead of pure numbers.

I think you made a good decision with the gatehouses, why would you want it open to enemies or closed to allies anyway

Combat looks great. Not sure about the gatehouses though...

The functionality, or the display?

Display wise, I'm not that happy either. I tried to make the sprite look not-horrible when units move underneath it, but I'm not really happy with the results.

Yeah, the display. Functionality I've got no objections. The doors are just too wide, the one on the bottom looks like it's on stilts. The grass underneath it might be a mistake as well. With the old square one it was okay, but with this one it makes it look like it has no fundation and is going to collapse like a jenga tower at the first stiff breeze.

I think the root of the problem is the hexagonal nature of the structure. Perhaps you could make the gatehouse a wall upgrade like in 0 ad, then you can require that it be placed on a straight section, which should make it easier to design visually.

I think I could improve the gatehouse by changing some of the logic of how units move through buildings. When a unit enters the gatehouse, the individuals could bunch up to enter "single file", which would allow me to shrink the door without having people seem to phase through the wall.