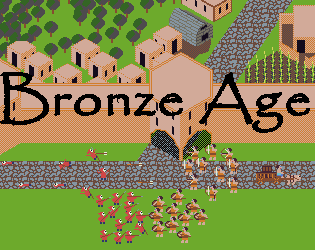 At long last, 2.0 is here. This release might be a little rocky, as the entire game has been pretty much re-written since 1.4.

Entirely new, hex based world. There is much less emphasis put on individuals, with the focus moved up to cities and groups of people. The UI has been entirely redone, and should hopefully be much more usable. The game itself should be a lot more stable as well, with fewer crashes during gameplay.

The economy now places an emphasis on the production and consumption rates of items. Warbands and trade wagons are a constant drain of resources, instead of an up-front cost. Bakeries constantly drain wheat to keep your people fed as well.

Settlements are also tied to regions, and can only place buildings within that region.

Road connectivity is important. Trade happens between Admin Centers (the tents placed when you settle), so the path between them needs to be clear. Tradehouses, and barracks need to be road adjacent so that the units have somewhere to go.

The game supports graphics, data, and logic mods. I'll document the modding API over the next few weeks on the wiki, but for a start you can look inside "BaseMod.zip" at the root of the Bronze Age directory. That zip file contains everything the core game needs to run, and should serve as a good guide. There are also two example mods packaged with Bronze Age, which can be found in the "mods" folder.

Graphics mods should be easier to make than before. The sprites are no longer in an atlas, but stored in individual files (animations are still in an atlas). When loading mods, any duplicate file names will be overwritten, so you just have to name your replacement sprites the same as the originals.

I really want the old building system back! also i cant play my old cities!

I added a second download last week "bronze-age-windows-classic" that is the old 1.4 version, which should work with your old cities.

thanks man, thats what i searched for

I'm loving the updates. Thank you for all your hard work on this project.

Looks good, I've played a little and like it so far. I have had some issues loading files though.

Hello, I am really exited and happy that 2.0 came out but in the menu there are several errors about rivers, water, mines, units, buildings basicly everything.  And when a world is creating on the end of picking centers for regions, fatal error pops up.

I can not build limestone mines, nor create new settelers. Not sure if this is a bug or a feature that I do not know about. anyone else have these issues?

need roads or other bui,dings near rocks. and you need an avalable citizen (blue men on the pop cap UI) :)

Very happy that it's finally here but.

For me it doesn't crash instead just generating pure water worlds with everything being ocean in preview and giving me only ocean starting points that do not really work for starting a game.

Also saved one of the maps just to see if the save data is anything different but as you can see there is literally just Water/ocean.

So I continued by playing around with the files and I think the noise maps have some problems. I deleted the ocean biome from the files and now I live in a world with only deserts and mountains.

Alright played around with some of the files and finally created a somewhat working Version for me.

For everyone with the same Problems that I'm having just put it into your mod folder and load it. I deleted the ocean and sand biome and added limestone and copper to grasslands since that is the only biome that can generate so this way you can play around with everything in the game. The map just looks pretty ugly since there is only grasslands and weird River/Mountains.

Hey thanks for the fix Twonky, I can at least see something now.

Still lots of bugs though, will take some time to get through all of them I think

I played around some more and actually found the bug. I noticed everytime something in the files said 0.75 I noticed it acted like it was actually 75. So I decided to go through the files and exchange every "." with a "," and now it works without a problem and a lot of bugs that I found are resolved at once.

Here is the REAL fixed version. Worldgen works and roads can now be used without the player dying of old age.

Thanks for putting out a fix while I was asleep.

I think the root cause is a culture issue when loading the mod files. Here in the states the culture (as a programming term) specifies periods for decimal points. I'm betting that where you live the culture specifies commas. I'll work up a proper fix, but it may take until tomorrow (real life concerns).

Yes that's it, ain't the first time this has happened.

Also a little question. Is it possible to destroy/capture maskling settlements yet? And if yes is there a period I have to replace involved?

Okay, found a better fix than using Twonky's mod. This is for people who live in regions where commas are used for decimal place. Instructions are for Windows 7 but probably apply to different Windows.

Change the Format to some type of English, or else it probably also works if you go to Additional Settings and change the Decimal symbol to "."

I got the samm water worlds

Just downloaded it. I'm excited and all, but I think it's gonna need a few fixes. As it stands, it says it's failing to load files and crashes on worldgen. Here's a pastebin of the crash log.

Yes, finally! Will try it out asap when I have time to play