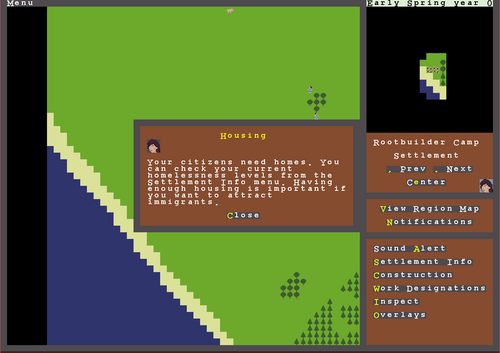 This update is called the "Economy Update",  but more properly it ought to be called "Public Release". The 1.1.0 update does a lot to make it feel like a proper game. Immigration especially, which lets settlements grow far beyond the 7 initial citizens. One of my test worlds got up to 100 people in a single city.

Maskling raids are proving tricky to balance, in 1.0.0 their raids were near constant but small. A pack of 5 masklings is laughable for an established city to fight off, and the constant raids fell into little more than background noise. Currently raids can get up to 30+ masklings, which is a formidable threat (though two-layered defenses hold pretty well). The downside is that, once you have a big enough settlement to start thinking about forming new cities, the maskling raids are large enough to wipe out any new settlement before it has a chance to forify.

Next update is going to focus on the military side of things, adding more depth to raids than a mob charging a city, and tailoring things so that small settlements have a chance to get established. A big feature will be the abililty to form your own warbands and take the fight to the masklings.