This last week I've wrapped up work on trade ships, trading logic, and the new world generator. Next up is transporting units on ships, and bronze.

I've decided to move battle changes out of 2.3, in the hopes of being able to release sooner, rather than later. Those changes will still be addressed at some point in the future.

2.3 will be coming with a new world generator with some exciting new functionality. This new generator can guarantee the existence of some world features (such as Tin), even if they're exceedingly rare. It also supports multiple world types, selectable when starting a new game. There are two world types so far, continents and mesopotamia.

The continents world is similar to the world generator in 2.2. It produces a mostly water world, dotted with islands and a few larger landmasses. This will be a good world type if you like boats.

Mesopotamia, on the other hand, is widely different. These worlds are mostly land, dotted with lakes, and crossed by rivers. They'll include deserts, mountain ranges, forests, and vast grasslands. They will usually contain one or two massive rivers that stretch from the very top o f the map to the very bottom.

This will be a good world type if you like land oriented game play and armies. Boats and sea trade will still be possible along the rivers, of course. Due to the vastly increased land area, these worlds will feel a lot larger.

Part of 2.3 will be a total rework of the UI. I haven't started on that yet, but here's a mockup of what I'm thinking of. What do you all think?

Note: I've cut out a bunch of the world to the left so the UI is large enough to be readable. 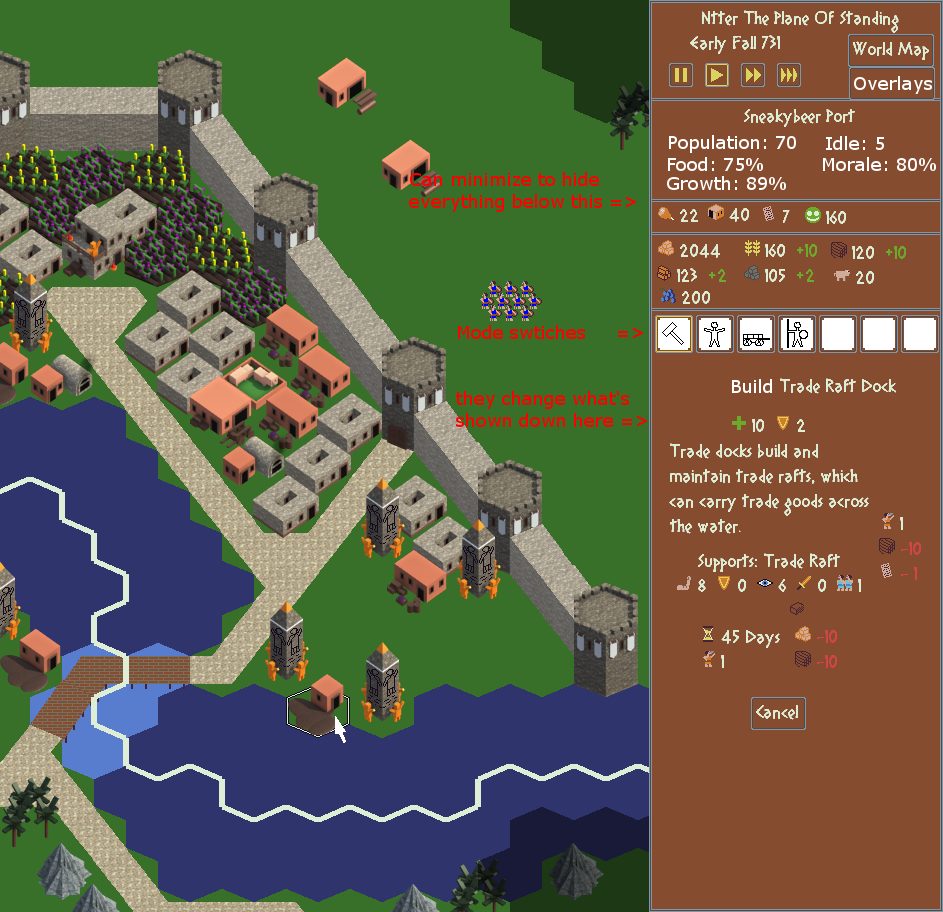 When is the next update coming? i'm really looking forward to it

It's wrapping up quite nicely. Should be out by this friday or the next one at latest.

I'll likely be delaying some small features (like new art for units) in the interest of getting the release out.

man i want too play this already! looks so sweet. theres this other game called neolithic and its like this but it looks more 16 bit age of empires 1 looking.

kinda same concept so i think but i cant wait for these games too be finished!!

Just wondering: Will the saves be transferrable?

Yes. My goal is for the saves to always be transferable. Old saves won't have tin, though (and hence, no bronze).

That's okay, I can just use the save file to through it in.

Manually editing the save file to add tin? That's an interesting solution.

When testing my mods I sometimes set all the hexes to discovered or upgrade structures that way. On a test world I made mountain defenses around my village and set every tile to explored, then replaced the maskling totems with copper palaces. The settlements grew quite a bit.

You're doing awesome stuff, keep up the good work.

Man, this is all great stuff. I really like the new graphics, they look great. I really like the stone houses with the central courtyard. The mode switches do look out of place, but I'm sure those are just place holders for the mock up. Great job Shawn!

I really like the mesopotamia map idea. Maybe you could have a choice for the level of green. That way you could focus development to be near the rivers, with desert starting some rough distance away from the water. You could also apply some debuff when operating on desert terrain to inhibit travelling or developing much away from wet regions. Maybe dot the deserts with oases or whatever.

Anyway, I love it. Can't wait to try it out.

The mode switches were crude drawings just for the mockup, in the finished product they'll look proper and cohesive with the other buttons.