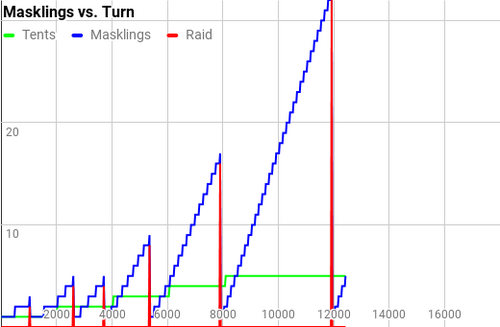 Masklings (the little guys with spears) are currently the only antagonists in BronzeAge. They periodically launch raids from their camps, prompting the player to build walls and towers to defend against them. In 1.0 they attacked pretty frequently, sending small raids of 5 or so. These raids aren't particularly threatening, but they were almost constant. It got to the point where in one of my test worlds I simply ignored the "enemy sighted" notifications.

I wanted to change that in 1.1. Now the size of their raids grows rapidly, and the time between raids decreases. The goal was to make raids small and manageable at first, but later becoming major events, while being infrequent enough to not be annoying. I even simulated Maskling camp growth and raid frequency (see chart) to help in balancing.

This model falls apart, however, once there is more than one Maskling camp. The camps don't coordinate, so it's easy to have the player get swamped by raids from multiple camps at the same time. Luck plays a major part in how the early game plays out, the number of camps generated nearby largely determines how frustrating the game will be.

Additionally, Masklings pick randomly from available targets when launching a raid. This means that if you create a new settlement it is just as much a valid target for a mob of 30 angry Masklings as the well fortified city you've built up over the past half hour.

These options will also allow for a more gently introduction to Masklings. In 1.1 the first time you see a Maskling it's going to try to destroy something, and unless  you've had the foresight to build a tower someone is likely going to die. In 1.2, the first time you see a Maskling they'll just be watching you, letting you know that enemies exist without punishing you. Then, over time, they will ramp up aggression. This will give the player time to build defenses before they're needed.

Warbands will also scale themselves to the settlement they're interacting with. No more will  a freshly founded settlement be mobbed by a swarm of 30, instead each settlement will get the same gradual ramp-up of hostility.

I love this game. in my opinion, best new game i've played in recent years

I don't know what your total plans are on this game, but I think it has a lot potential to grow big. For upgrades on the masklings and the attacking system I would like to see:

-Barracks to train soldiers (Like i posted in the other comment section. I think this would improve the game a lot because now, the only defense mechanism are the towers.
Building further on this idea. I would implement the ability to attack/take over maskling camps. So a second settlement can be build like that. For this, the masklings need to build a city with the elements you have to build your city with. But I think this would make the game more entertaining.

-Implementing big houses/appartments. In my game now, A wave of 300 immigrants strenghtened my city. So I have to build 300 houses which is a ton of work.
In addition to this, you can add a function where you hold shift en move your mouse where you want to place a series of buildings.

-A fast forward button would be handy when you just have to wait.

Hope I don't irritate you with all my enthousiasm about this game :)

Barracks to train soldiers you say? Check out the new update, 1.2 adds just that.

I plan on adding some more advanced housing options soon, as well as giving a reason to have multiple settlements.

As for your enthusiasm, it doesn't bother me in the slightest, it's nice knowing that other people are as excited about Bronze Age as I am.