The next update for Bronze Age will focus on settlement management. There are two main features: Bonuses and Buffs.

Bonuses are a new element designed to encourage a quality over quantity approach to settlement management. Structures can produce bonuses much like Infrastructure or Items, but unlike those bonuses aren't directly useful. Instead the increase the performance of other structures.

For an example: windmills. 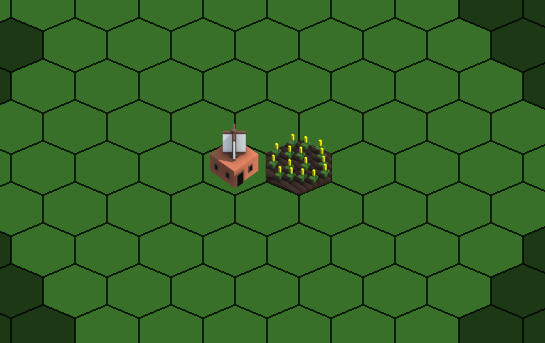 In this setup these two structures require 2 administration and 2 workers to produce 7 wheat. You'd be better off replacing the windmill with another farm. 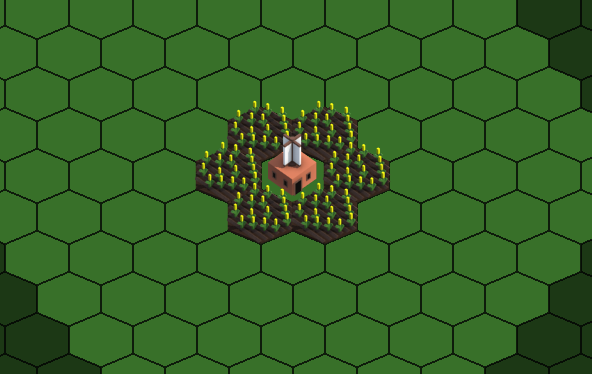 In this setup we have 7 structures that require 7 administration and 7 workers. The total output though is 42 wheat per season. Replacing the windmill with a farm would result in only 35 wheat per season.

Bonuses can be local to the same hex, apply to all adjacent hexes, or apply to the entire settlement.

Buffs are temporary effects that can target a region, a tribe, or the whole world. They can add or remove item production, infrastructure, or bonuses. They will be managed by scripts, and therefore easily moddable.

As part of this update I'll be using the new bonuses to rework the happiness and moral systems.

Happiness is Kind of Silly

There are a couple silly parts of the current happiness implementation.

Another change from 2.3 is that each pop will now only require 1 happiness. Previously the happiness required scaled up quadratically with settlement population, that's a little over-complicated and didn't really do what I wanted. So, 1 happiness needed per pop, but your way to produce happiness will be tied to houses. A fully upgraded house will hold 3 pops, but a fully upgraded brewery will only provide a 2 happiness bonus to all adjacent hexes. You'll have to cleverly plan your settlements to get optimal happiness.

The monument and garden will be temporarily demoted to being decorative structures, as they won't have a good role in 2.4. The monument will probably return to significance when religion is introduced.

Riots are Kind of Silly

In 2.3 a settlement with 99% morale will eventually riot. That doesn't make much sense. I don't have this solution fully planned out, but the riots will be replaced with a wide range of civil disobedience, with severity matched to settlement morale. A settlement at 80% morale may have increased crime, but no all out riots.

A more scaled-down riot could be resource debuffs.

The morale rework is nice to see, dealing with the current morale system is really tedious. I have to go to all of my settlements to see how morale is doing, and if it's low I have to do a run of placing several monuments and fully upgrading them. The adjacency bonuses system sounds good aswell, and seems like it will create more fun/interesting decisions when laying out a city.

Oh yes dealing with morale is challenging :D I don't  bother with checking every settlement. When I upgrade settlement I just see how much there will be  housing and with this I build enough monuments by counting happiness they will provide. So every upgrade step with 10 pop you need 10 happiness, 20 needs  40 and 30 population 90 happiness  and everything in between it's irrelevant. So I try to build first happiness to this numbers then add population. But it's really annoying, new model sounds much better.