This update has improvements around UI layout performance. Framerates when viewing settlements should be noticeably smoother. The colors have also been tweaked to have better contrast.

The biggest feature of this update is a new population need system, prompted by discussions on the unoffical discord server, and refined through the beta channel there. This system changes how you support your population. Instead of just needing to provide food and happiness, now you need to provide an array of items. As settlements grow their needs change.

A small village will be content with just a supply of wheat, but as it grows your people will get more demanding. They will want wheat, then bread. Happiness functions similarly, through providing luxury items: beer, wine, and silk.

The mechanical effect is that large settlements will require more involved supply chains. 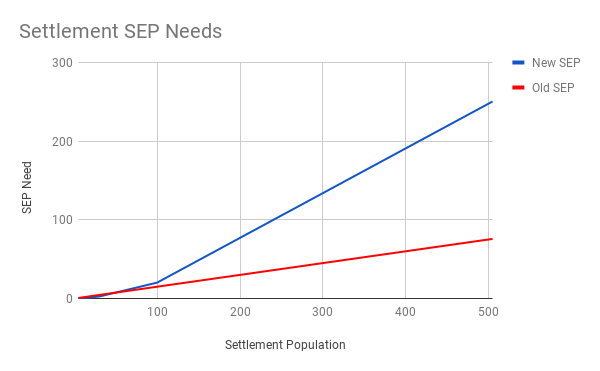 This graph shows the SEP (Standard Effort Point (1 Population and 1 Administration) it takes to support a settlement under the old system (red) and new system (blue). Megacities are still possible, but will take a lot more effort.

As part of this change the windmill no longer provides an agriculture bonus, it instead turns wheat into flour.

A small change, but you can now dig canals in your settlements. You can also fill in shallow water.

Mod and Save Compatibility

There should be no compatibility issues with mods or saves, though old worlds may have some morale issues until you can start meeting your population's new needs.

This will encourage more trade networks and reward growing your capital city.

The framework for plot generation is complete, but not included in 2.6.1. At the start of each new game a storyline will be generated from dozens of events, scheduled and orchestrated together. This is a very modular system, able to be easily expanded through future updates and mods. The next step is to start fleshing out the events, which will take awhile. Hopefully enough events will be in place for an initial release in 2.6.2.

Looking forward to the new stuff you got in store for us; keep up the good work Shawn!