A Slight Change of Direction

The further that Bronze Age has grown the more that I feel some things are holding it back.

The entire world is stored and simulated at the highest detail level. This means that a lot of time and space is wasted on irrelevant detail. There's no need to render a random patch of countryside at the same detail as a city. In moving from 1.x (Bronze Age: Classic) to 2.x I changed the scale of the world, but still kept the scale the same across the whole world. This allowed the scale of the game to grow, but lost the finer detail of settlements. It also failed to adequately address the problem.

The loss in scale can be directly seen in road layouts in cities. There's no real need for roads anymore. Almost all of the roads I place are purely aesthetic.

Combat in Bronze Age is in a weird place. The controls are high-level and abstract, but the display is more detailed. Looking at the combat, I imagine that it should play out more like Age of Wonders III, while in actuality there is very little depth to it. I think combat needs to go one way or the other, either a detailed tactical game or an abstraction.

The combat model also handles sieges very poorly. Once a settlement is fortified it is pretty much immune to the AI.

Speaking of the AI, the way the world is built and the way units are handled makes it difficult for the AI to manage.

To me, the core of Bronze Age is the production and movement of items. In Bronze Age 2.x item production in settlements is just a matter of balancing numbers. Routing items between settlements, through, is far more interesting. I'd like to bring some of the depth of trade into settlement management.

Bronze Age 3.0. The primary changes are around world structure. The world will have 2 scales. A coarse representation of the entire world, and a detailed representation for cities (generated as needed). 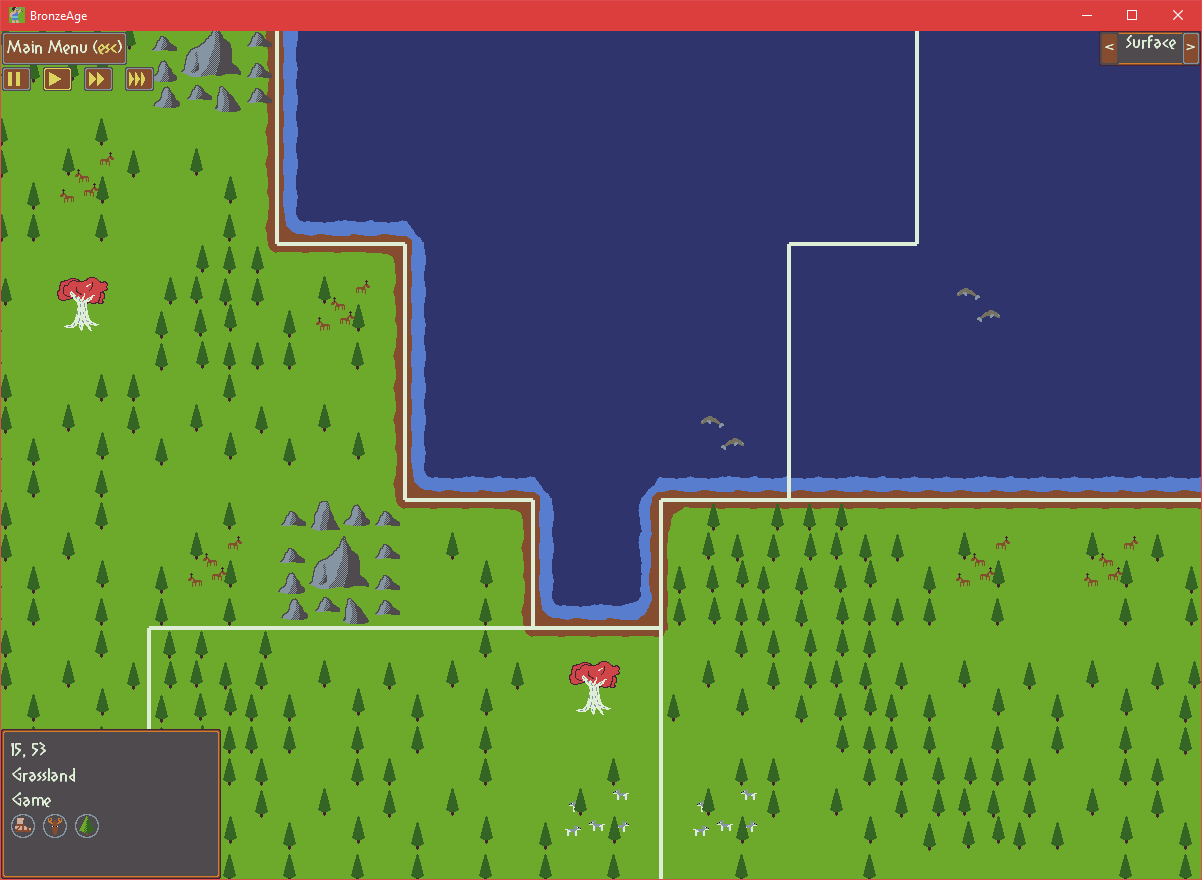 Graphics are more placeholder than usual.

The basic world map view will render down to the "cell" level. These cells are about the size of regions in Bronze Age 2.x. Each cell can be developed for things like farms, mines, and roads. Only one development for the entire cell. Cells can also be developed into settlements.

Settlements will be at an entirely different scale, much closer to Bronze Age 1.0. On the main map they will be shown abstractly, but upon "zooming in" the view will shift to a dedicated layout. 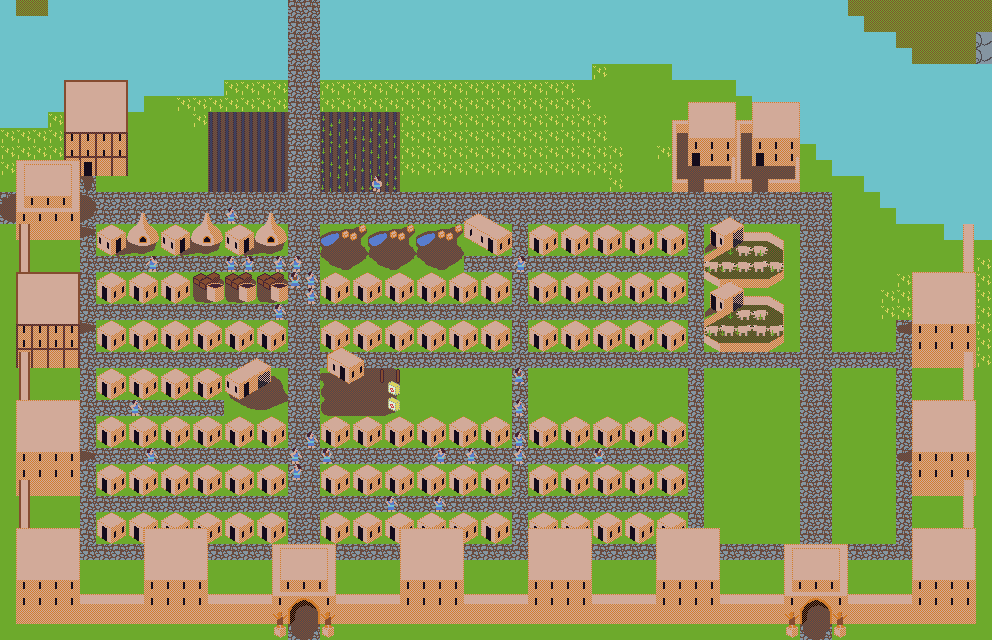 Roads will be important again, with traffic congestion modeled into item distribution through a pre-calculated intra-settlement logistics system. That system will be the subject of a future post.

One thing that I've wanted to add for awhile is the idea of multiple "planes". In Age of Wonders there are several layers to the maps, with units able to move between them. That functionality is built into the world generation for Bronze Age 3.0, with two ways the planes can link. They can either mirror each other, or link together at a few points. 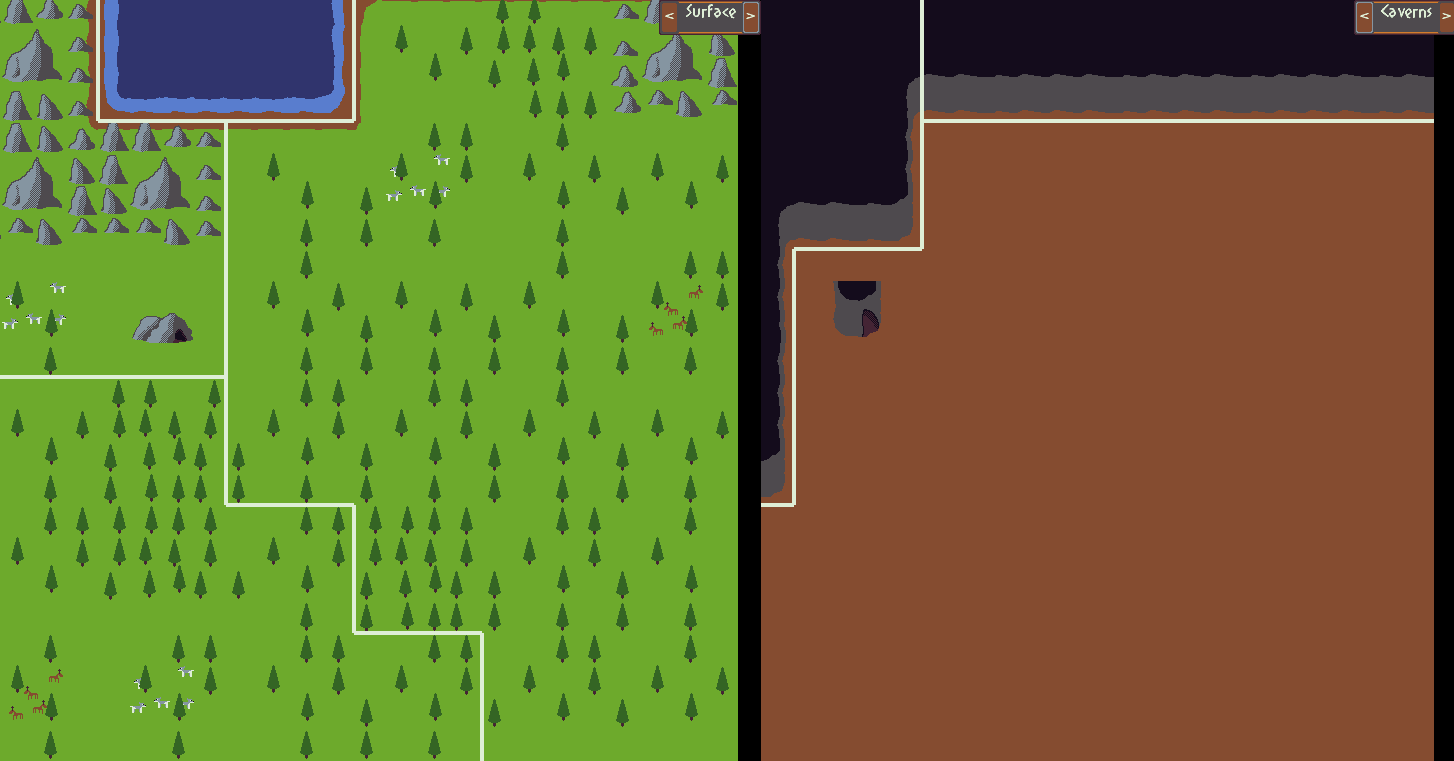 The cavern plane is linked to the surface plane by caves

I honestly have no idea. I'm starting a new job soon, and my time to work on Bronze Age will be reduced until I get settled. The world generation and basic world structure is finished, through, next up I'll be starting on settlements.

I'll likely put out some more releases for 2.x in the meantime, especially for features I'm planning on including in 3.0 as well.

I was very disappointed by 2.0's cities, I really liked how large they looked in 1.x. Very glad to see they'll be back.

Like the new direction the game's taking; i was a bit disappointed when you switched the landscape layout from 2D to the civ-style hexagons, so seeing it go back is always a welcome change.

Hoping for Betas as soon as possible. Keep up the good work!