Got a little side tracked this week, and spent most of it working on a scripting system for events and triggers. I finished that last night, proving it out with immigrant spawning. In 1.4 immigrants just show up and join a settlement, in 2.0 you'll get an interaction window with the option to either accept the immigrants, or reject them. Now that immigrants are in place settlements can gain enough population to make settlement management feasible.

A Question of Cities

Kaian-a-coel shared some concerns last week (which I appreciate) and I did some thinking on the matter, and some mock ups. Looking at the mock ups I'm second-guessing my plan for settlement management. 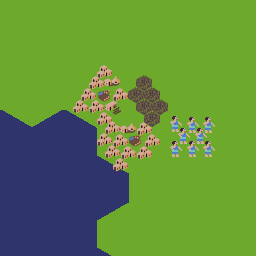 This is a mock up quickly thrown together in GIMP, not from the actual game.

My original plan was for settlements to be hex based. Settlers would pick a hex to settle in, which would be the location of the settlement. As the settlement grows it could then expand into adjacent hexes. Each hex has 12 sub-hexes, and each of those could have a structure built in them.

Mocking that up, however, the scale seems very strange between the settlement and the unit standing next to it. And the subhexes don't tesselate together very well. 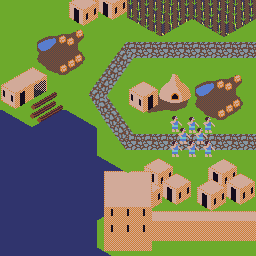 This is a mock up quickly thrown together in GIMP, not from the actual game.
This is a lot closer to Bronze Age as it is today, with one structure per hex. As you can see, the scale matches the units better, but roads are necessary to allow units to path around a city without looking very strange. This approach would mean that I would have to re-work the world generator to adjust to a different scale, and it would complicate settlement capture mechanics.

Cities at this scale could also look very strange without people walking around them. Reducing the amount of people moving around was the driving force behind 2.0 in the first place.

I'm still uncertain which approach I'll take, and I welcome any thoughts you all have.

My main issue wasn't with the sub-hex system on its own, it's with the

small number of buildings to place. Your previous dev diaries said the
settlements would consist of a couple hexes with a dozen buildings
inside each, which I believe to be a serious downgrade from the 1000+
buildings of 1.4 cities.

This might be one of the reasons why the cities look off in the mockup. Your sprites were designed for a tightly packed square grid with a couple hundred buildings at the very least. The bakery for example was made to fit in a 2x1 rectangle. Put it in an hex on its own (or just a sub-hex) and it's going to look out of place. Especially if you have buildings that used to take anywhere from 2x2 to 5x5 and now take the same 1 hex of place.

Thinking about it further, I think a hybrid of sorts could be made, using essentially the second system, but keeping the general idea of "sub hexes" by creating small-ish zones that would play the role of the larger hexes of the first system, but without being necessarily hexagonal, or quite as small. Sort of like the region system planned for 1.5 but with hexes and smaller regions.

Here's a bullet point list to summarize my ramblings:

You have been, and I appreciate the input.

I'm leaning more and more towards the single structure per hex system, combine with the regions planned for 1.5.

I think some more "cosmetic" roads will be on hex borders, but major roads are going to have to occupy whole hexes. That way units can march through hexes without appearing to clip through structures. I think that could lend itself to some interesting tactical combat in cities as well. In 1.4 formations didn't handle streets very well, but since units fill a single hex in 2.0 they should be able to fight their way though streets in a similar way to a total war game. That could lead to interesting tactical possibilities in designing cities to withstand attack.

Substitute people walking around with sprites in buildings idling or pacing back and forth to give the impression of activity?

Some structures  in 1.4 (like the Farm and the Brickworks) had a visual effect of a worker tending the fields, something like that could work well, I think, and be expanded to people wandering around the "cosmetic" streets around structures. As just visual effects they would have a very low computational cost.

>You have been, and I appreciate the input.

By the way, I'd like to apologize for my comments in the previous dev diary. Lookng back at them, they are rash and overly agressive. I shouldn't have posted so emotionally.

I'm with this guy on this one. Microing my settlements is very important, as are aesthetics; to that end I think he's got the right idea here.

well maybe have a unit like a small ant column army. like romance of the three kingdoms.

so they wont be so big. not sure how the workers would be like this though .

well. i see both points. personally i like how it is now. but if you think the hex with proper scale houses is good looking. hope everything gets good.