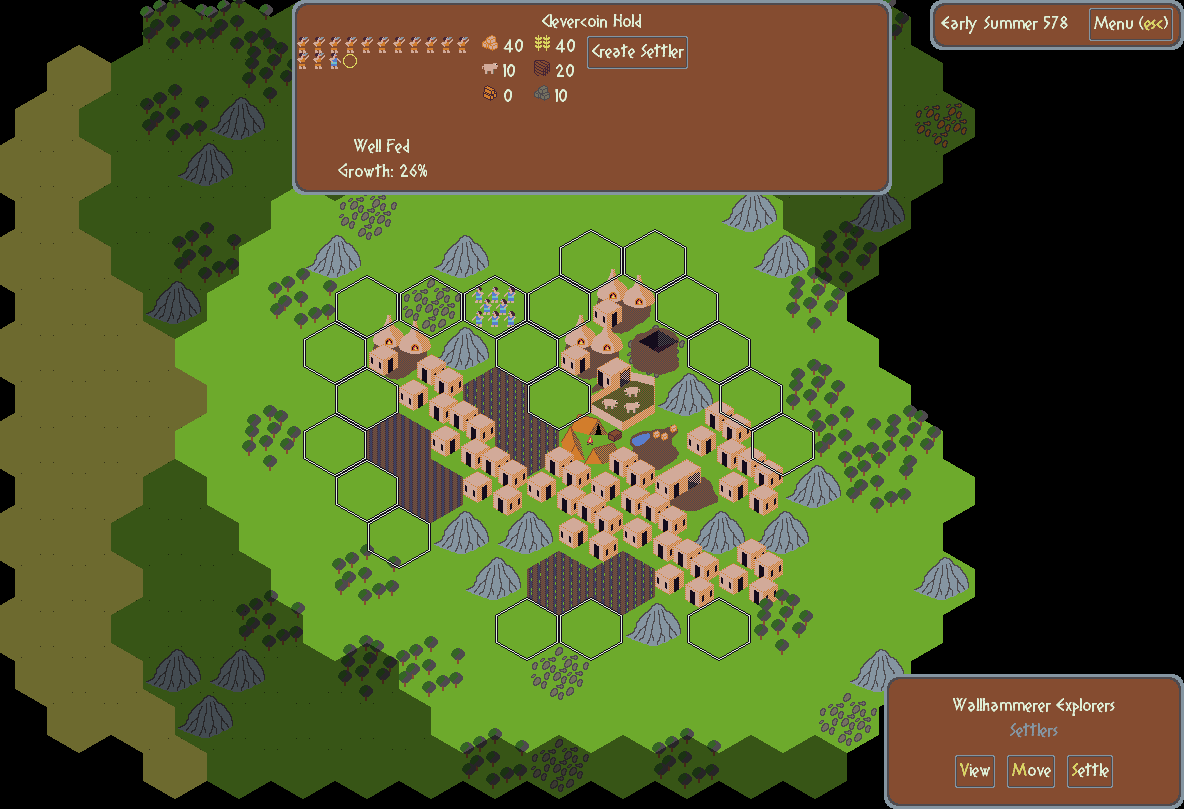 Really good progress this week. Basic settlement management is finished, including population growth, food, and special resources. You can even create settlers to found new cities. Roads are next, followed by trade, and then Masklings and Combat. Looking at the remaining features to bring 2.0 up to parity with 1.4, I've laid out a rough timeline below. 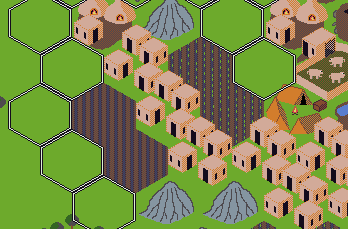 The world in Bronze Age 2.0 is hex based. Structures can be build on hexes adjacent to other structures already in the settlement, simply by clicking  on them. Available building locations are highlighted. Like in 1.4 some structures require resources to be constructed, and the settlement must have a free citizen. Some structures have other placement restrictions, like mines. 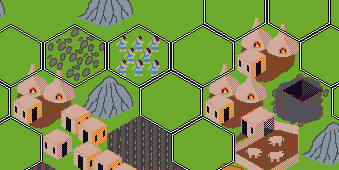 Resources (fertile soil, stone, ores, and trees) in 2.0 are static, and won't run out like they do in 1.4. They are harvested by building a structure on their hex. The patch of stone above is a limestone resource, and the player can build a stone mine on top of it. The stone mine will them produce limestone, similar to how mines work in 1.4. Instead of being cut down trees are now handled as a resource, harvested by building a Lumber Yard on their hex.

The economy functions much the same as in 1.4. Structures automatically consume and produce items as needed by the settlement. The major difference is that the actual location of the items is not tracked, they are instead assumed to be wherever they are needed, massively cutting down on the complexity of the simulation. The amount of items in a settlement is displayed in the UI, as you can see below, represented by icons.

Like items, how population is handled is changing in 2.0. Instead of having individuals running around a settlement they are now tracked through an abstract measure. The image above shows the population display. A settlement has a certain capacity for population (increased by building housing), and each citizen is either working or idle. Most structures require a citizen to operate them, and all structures require a citizen to be build or removed. As long as the population is fed (not Starving) and as long as their is room (as shown by empty circles) the population will grow.

If your settlement has idle citizens, you can press the "Create Settler" button, to have them leave the settlement and become a Settler. Those settlers can be ordered to move around, found new settlements, or join and existing settlement (as long as it has enough housing).

Trade and roads will be added shortly. Trade will work much as it does in 1.4. Roads will count as structures for the purpose of unlocking construction plots, but they will also be passable by units. Some structures will require road access, and invading armies will try to walk along roads to reach the town center. This should result in more interesting siege gameplay, with armies fighting in the streets, and a tower-defense aspect to settlement construction.

One thing I'd like to add in the future is adjacency bonuses. An irrigation structure, for example, could boost the output of adjacent farms, adding a spatial optimization aspect to economic buildings.

Any feedback is appreciated, as always. I realize this is a rather drastic change for Bronze Age, but I think it will enable the game to grow into it's own unique self.

Have you thought about playing around with the font, maybe like an Albertus Medium or Book Antiqua?

The font is easily changeable. Is that one hard to read? I think it fits the "ancient world" mood.

That's just my personal opinion, I find the lettering difficult.

It definitely fits the aesthetic though!

Looks good, can't wait to try it out!

Do you think it will play similar to 1.4?

For the most part, it should. Some of the mechanics, especially around warbands and fighting will be different, but the core emphasis around obtaining resources is the same.

Looks great, is that tin and bronze in the ui? :) There might be a need for structures that are built in between hexes, such as roads, irrigation canals, walls, etc.

I also think that copper and tin should be finite, to help drive a need for colonization and expansion. Limestone should also probably be finite, though I don't think it is as important. It would be interesting to have forests that regenerate slowly unless completely harvested, though that might not work well at the end of the day.  Copper ore (malachite) is a dull green color, I think that deposits should match that shade.

I'm excited to watch all your progress, can't wait to get my hands on the new sim.

The items in the UI are (by row): mudbrick, wheat, pigs, lumber, copper, limestone.

I added roads a few hours after I posted this, actually, and they each fill a hex. That's a necessity so that units can use them to move around. However, I would like to add some "life" back to settlements by having the inhabitants wander around. Those citizens would walk along smaller paths on the borders of hexes. Walls will probably fill hexes entirely, like roads.

Even with infinite resources there will still be a need for expansion. The economy has changed a bit to put more emphasis on the rate of resource production, rather than the raw amount. Bakeries for example, consume 1 wheat every 100 seconds, the stockpile of wheat isn't as important as the ability to produce it  at that rate. Warbands will follow a similar model.

I'm planning on making them the focus of the next devlog, but in essence each warband will be a constant drain on resources. A single copper patch will only support a limited number of warbands (probably only 1).

That makes a lot of sense. You could even have things decay that you can't support, like a warband that does less damage for lack of metal or walls that are weaker or buildings that eventually collapse. Malnourished workers might process resources more slowly. You could get natural ruins that way, as well as potentially annexing holdings into an empire that cannot completely support it, forcing you to choose what to neglect. It might be useful in such a situation to have the option to deny resources strategically.

Anyway, I'm rambling now, but I like really like the idea or placing more focus on maintenance. I think that could scale very well and provide for many interesting decisions and circumstances. Thanks for letting us in the process here, can't wait to see where you take it.

Wow, that first picture looks amazing! I'm impressed by how much progress you made. I like how you've made the bakery fit into an hexagon. I don't have any major criticism to make this week. The world gen looks unaturally random but I'll chalk this off to a work in progress.

Just a few minor suggestions before I forget: The ability to turn off the highlighted hexes when you're not building, and an income display next to the item numbers. Like "wheat 30 (+2)". Per 100 turns or however it works. This would be handy to determine at a glance whether a city has enough farms to sustain the bakeries, or too much.

I'm impatient to see what comes next! Keep up the good work!

The world gen looks unaturally random but I'll chalk this off to a work in progress.

If you're referring to the scattered mountains, that's due to me not knowing how to properly draw a "rocky outcrop" . The town is situated in highlands terrain, which has scattered rocks, ore, and trees. Worlds overall should look similar to the previous preview devlog.

Thanks for the suggestions, toggling the hex highlighting is a good idea, and I'm planning on some sort of production/consumption rate display.