You will find that it is notably different than previous versions, but I feel that it is overall a better performing, deeper, and more compelling experience. This isn't the end of development for Bronze Age, many more features will be coming starting with 3.1. Look for a development log in early April so with details on that.

The world is now split into two levels. The world map shows the entire world, broken up into regions. This is where most of the action takes place, where settlements are founded and where armies march. Areas of the regions (cells) can be developed into mines, farms, and villages. Villages can be upgraded into cities. These cities have individual, detailed maps giving you a great deal of control over their layout. 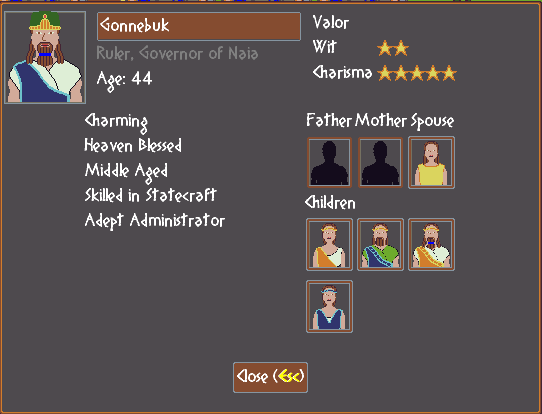 All tribes now have a ruling dynasty. These characters have parents, children, and stats. They can be assigned as generals and governors, with their individual skills giving bonuses to the armies and settlements they are in charge of. The king and governors also have an authority stat which gives a soft limit to the total population they can oversee.

Units are now grouped into armies, which can be lead by a character. These armies move and fight together. Right now all combat is handled through an auto-resolve system, but the tactical combat outlined back in September will be implemented in an upcoming release.

As mentioned above, settlement management has been split into two levels. The goal is to have most settlements in the empire as simple to manage villages, with a select few cities managed in greater detail. The villages are intended to be resource colonies and outposts, while cities are the great population and industrial centers of your empire.

Thanks, I love it

This is great, I can't wait to check it out!