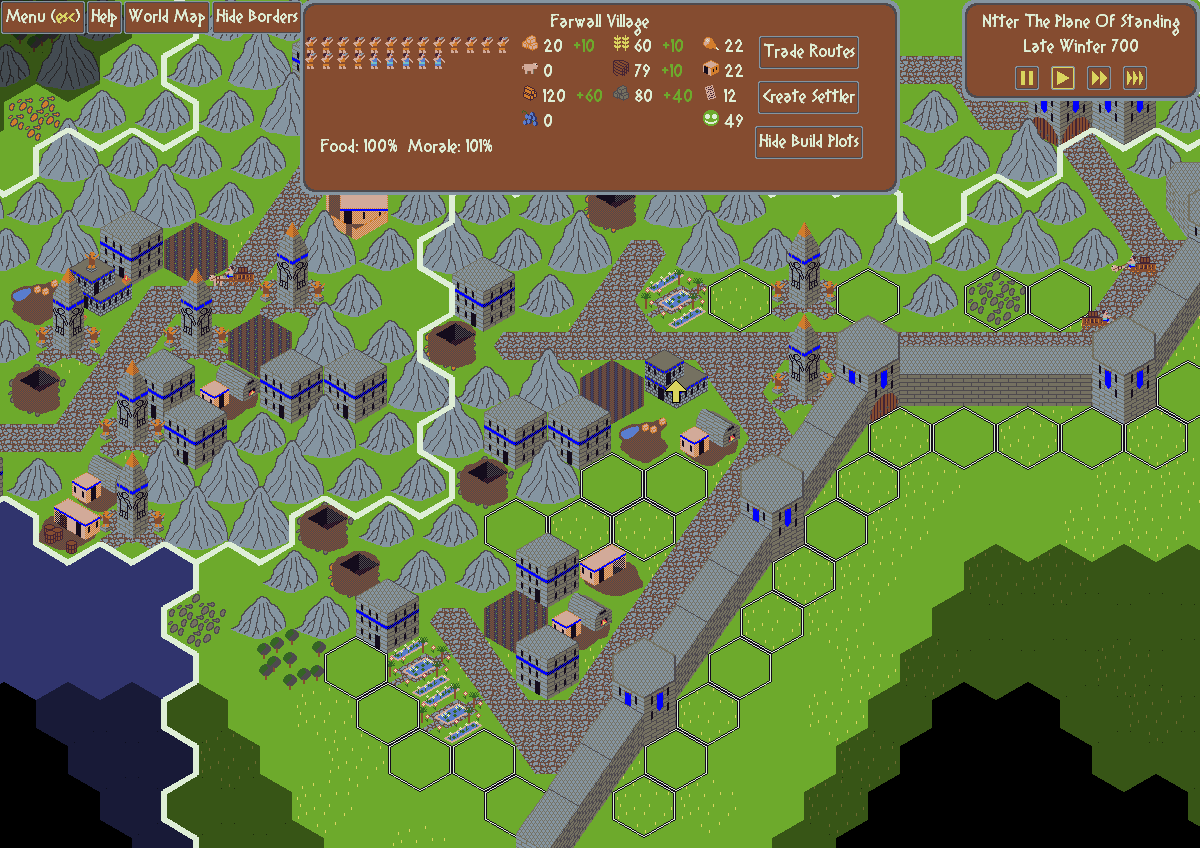 2.2 is here, which should add some more complexity and challenge to settlement management. You won't be able to endlessly grow settlements any more. The happiness of your citizens and the administration capacity of your rulers will slow you down, forcing expansion and trade. The goal is for advanced settlements to feel somewhat like an optimization puzzle, trying to eek out the most performance of the limited Administration and resources at your disposal.

I went into more detail on how the new mechanics work in  the 2.1.1 and Morale Update Preview devlog.

Like most releases, your old worlds can be loaded in 2.2. However, I don't recommend it this time. There are changes to the world generator to produce worlds more compatible with the new mechanics in 2.2, and old settlements will likely die a quick death from riots and insufficient Administration.

I'm trying something new with experimental features. In part to find problems with the mod API, and to experiment with some ideas, I'm going to be adding more built-in mods. These mods are distributed with Bronze Age, but aren't enabled by default. You can opt-in to them by enabling them from the Mods menu.

The first one is respawning Masklings, and comes with 2.2. Every year a trigger will check the world, and place new settlements for Maskling tribes that have been cleared out.  It has the potential to flood the world with Masklings, but that sort of challenge may be right up your alley.

The existing scripts have been more thoroughly documented, and the riots and homeless triggers demonstrate some more advanced abilities. t_riots, for example, creates new tribes and units.

There's been quite a few changes to the data file layout, which I've covered in a Mod Upgrade Guide, for upgrading 2.1 mods to 2.2

As I like the game for several months now theres a feature I dont enjoy that much its the administration idea. Yeah it puts some challenge in to which resource you need the most so you just demolish few buildings to get the resource you need etc... but it also brings the limitations as you cannot create the unlimited big settlements and you are limited to only have buildings on 8%-30% land (depending on the number of hexagons in that region) on the regions which puts the ,,defensive fight" against the masklings almost like rubbish idea if you want to connect more regions into one city or settlement.

Here are few idea ive come up with to improve it:

1. Make the regions small as they were in 2.0 or around the same size beacuse with that it would give the option to create one big city made out of for example 5 regions and it would fit into the current number of administration.

2. Higher the number of administration you get from upgrading the settlement center building. (tent, palace, copper palace)

4. Or just a simple mod which will change the number of administration to huge amount or to infinite. (I would do it myself but I suck at coding and I would brake the game for myself)

Administration is important, I think, to keeping the game balanced. Without Administration settlements can have unbounded growth. This throws off the balance of the rest of the game, combat especially. The goal is to force a quality-over-quantity approach.

That being said, there will be higher level admin centers added in the future, which will have even more Administration. The Nobles Update will also add more tools for increasing Administration, but at the cost of needing to funnel more resources into a single city. I'd like large cities to be possible, but only when supported by an entire empire.

I really love the new mountain ranges. The whole world feels much better now. Maybe they can be designed to merge into each other like the walls and roads do.

The administration system really gives a lot of focus to city design. Fantastic job, things are really coming together!

Love 2.2! Already figured out the best way to deal with Riots; well-placed towers.

Already working on a Mod for 2.2. So many possibilities... I'm starting with something that will allow you to extend your administration, coupled with a spy-type structure that will force your citizens into happiness.

The Spy. Fast and incredibly powerful. Can be supported by an upgraded Intelligence Organization.

The Original and Upgraded Intelligence Organizations (Military). Costly, but necessary to keep up happiness in large settlements.

The Library (Civil). A structure that increases your Administration. Still have to add the upgraded version, than I'll upload the mod.

I'm looking forward to trying it out.

already one issue i'm coming across is the upgrading the city centers.  First time i upgraded it, everything went smoothly; second time i upgraded it, the construction got permanently stuck at 95%, nothing was functioning (probably because all the happiness the center provided was erased) leaving me to just abandon the city and re-settle it.  That was also a complete disaster with the center restarting with -7 admin and a health of -214(string of 8-ish numbers)%.

Happened to me too - my road got damaged and somebody stopped upgrading to fix it. Demolished the road and rebuilt it, good as new.

Already I want to be able to build a "scribe's office" or something for more administration.

I had the same issue. Enemies couldn't destroy it, either. They'd run up and hit it once then run away. I fixed it by editing the save file by hand. :( First I gave the whole settlement to another tribe and tried to capture it back, but my units just hit it once and stopped while it streamed arrows at them. So I ran a find for "under" to find the hexes and just cleared out the structure completely and resettled.

I'm not sure if it was necessary, but I cleared out all structures except walls and roads in that region so that I could start fresh. I "marked" them by issuing demolish commands so that they would be under construction in the save file, for identification.

keep up the good work Shawn!