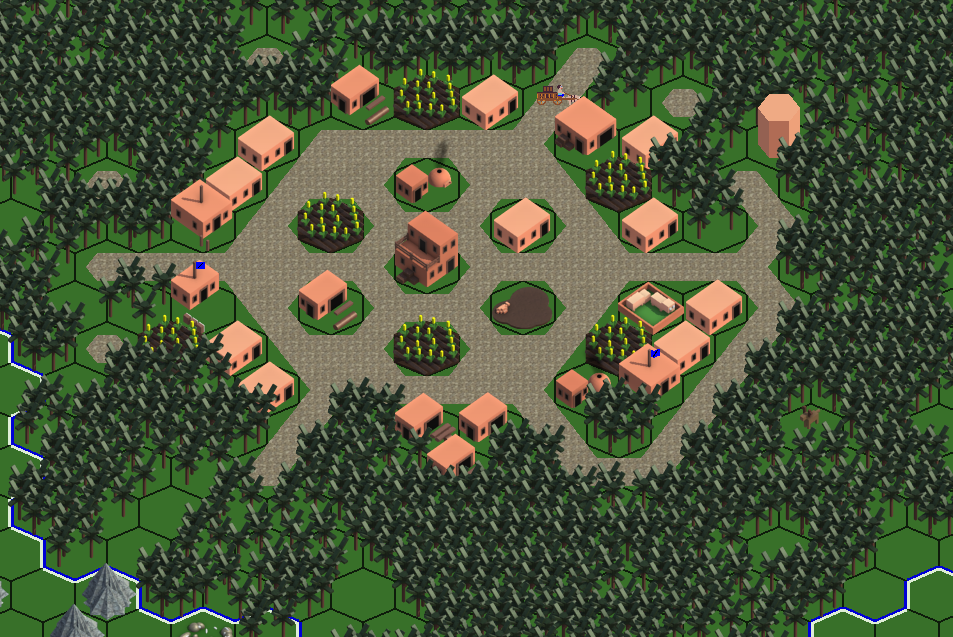 The hillfolk are a new AI type. They are Humittes structures, just like the villages, but more aggressive and prone to raiding. They will also surround their settlements with walls, if they can.

You're likely to find the hillfolk in forests and highlands, possibly even mining on Copper or Tin deposits.

The Happiness Rework Mod mentioned in the last update has been merged into the base game. The major change is that your people won't be automatically unhappy. Each house provides as much happiness as it does housing. Breweries have been removed. Now the key to keeping your people happy is food. If they don't have enough food, they'll be unhappy. If they have extra food, they'll be happy. You can also distribute luxuries through markets to further boost happiness. Wine and silk have been merged into a single luxury item.

To offset no longer needing breweries, bakeries need twice as much wheat.

High happiness can also result in occasional buffs as well, which will provide an agricultural and industry bonus to the entire settlement, for a time.

Meat has a new role. Instead of providing both food and happiness, it is now an efficient way to move and distribute food.

Save File and Mod Compatibility

There shouldn't be any trouble migrating save files, though your settlements might need a little tweaking to handle the happiness rework.

Only mods that replace the base data files will need to be updated.

The next release will focus around war. The AI will make more aggressive attacks, and you'll be able to coordinate attacks with your allies. Likewise, the AI could coordinate against you.

what are the requirements of this game? uh, its not loading.

Try updating to the latest version of the .net framework, that's the usual culprit.

Is there a file called bronze_crash.txt in the folder with bronze age? That's an automatically created crash log.

can you add some automation in some places? i cant really handle microing every single bit of my empire.

Where would you like to see automation?  The only specific pain points I've seen mentioned is building upgrading.

auto building would be probably enough for me.

Auto building what? Just have the AI take over construction?

Yeah thats what i meant.

Construction is a core part of the game. There wouldn't be much left in Bronze Age without it. I do, however, want to enable the player to specify future planned construction, with construction happening automatically as workers become available.